Settlement for 2.5 million..Click here for more

Theodore Pavlounis and Andrew G. Sfouggatakis have recovered millions of dollars for their clients over the last two decades. Located in the vibrant heart of Dyker Heights, Brooklyn and now expanding across the five boroughs and throughout New York State, P & S LLP,has grown to be one of the most respected law firms in New York City. P & S LLP fights for the rights of everyday citizens like you who have been unjustly injured due to the negligence of others.

Strengthened by our reputation in the community among our clients, our colleagues, and in the courthouse, P & S LLP has become one of the most successful and well known law firms in the region. With several attorneys on staff as well as other paralegals, assistants and staff members, we have the necessary combination of experience, tenacity and compassion needed to fight for your rights. The firm is one of New York’s leading personal injury litigation groups today.

Our firm was founded by Theodore Pavlouniswho has earned a reputation as being a relentless advocate for those in need of a voice in our legal system. His skill and knowledge of the law have been demonstrated over the years from his countless appearances on television, radio and in newspaper as a legal expert, and from some of the famous cases he has handled over his 20 year career. 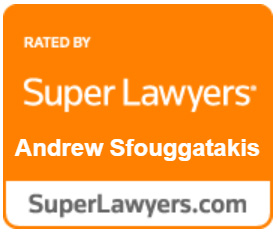 Andrew was born and raised in Brooklyn. He attended Xaverian High School and Fordham University in the Bronx. He went on to New York Law School where he graduated with Honors and served as an Editor on the Journal of Human Rights. Upon graduation in 1999 he served as an Assistant Corporation Counsel for the City of New York until 2002 when he joined the private sector at an insurance defense law firm. In 2009 he opened his own law firm representing accident victims that merged with Theodore Pavlounis in 2013 on the same mission. He is admitted to practice in all Courts of the State of New York as well as the Southern and Eastern Districts of New York. He is the proud father of two children, Marissa, 24 and George 11.

Prior results do not guarantee a similar outcome. We work on a contingency basis, which means that you don’t pay a cent until you receive compensation, at which point you are charged a percentage of the settlement. There is no fee for our services unless a recovery is won. We offer a free initial consultation. If you or someone you love has been a victim of a serious personal injury and wish to bring legal action for compensation for physical and emotional damages click here to contact our personal injury attorneys .